Steak Tartare or Filet Américain, a typical Belgian dish, made of raw meat and seasoned with mustard, Worcester sauce, mayonaise, ketchup, tabasco, chopped onions & parsley and … capers. One of the miracles of Belgian cuisine.

Few places in Belgium beat the Canterbury version. It wasn’t till I started “The Caper Journey” I learned its history.

It all started with the birth of Joseph Niels, founder of the Niels dynasty. Born in 1890, he was the son of a large family of farmers living in the Flemish region of Brabant.

The Invention of the Steak Tartare, alias Filet Américain

In 1908 a disease strikes the livestock of the farm. Joseph decides to leave for Great Britain where he works in the famous Savoy Hotel in London. Four years later, in 1912, he returnes to Belgium where he is hired at the restaurant La Taverne Royale, situated in the gallery St Hubert in Brussels. Some time later he becomes the director of La Tavern Royale..

Comes 1926 when he opens his own restaurant, at the Emile Jacqmain Boulevard in Brussels. In memory of his Great Britain years he names it Canterbury. It is here that he invents his famous recipe for the Filet Américain.

For more than half a century, this restaurant has been the inevitable meeting point of artists, politicians and business men alike.

At the 1935 universal exposition of Brussels, Joseph Niels represents the Belgian gastronomy with his own pavilion 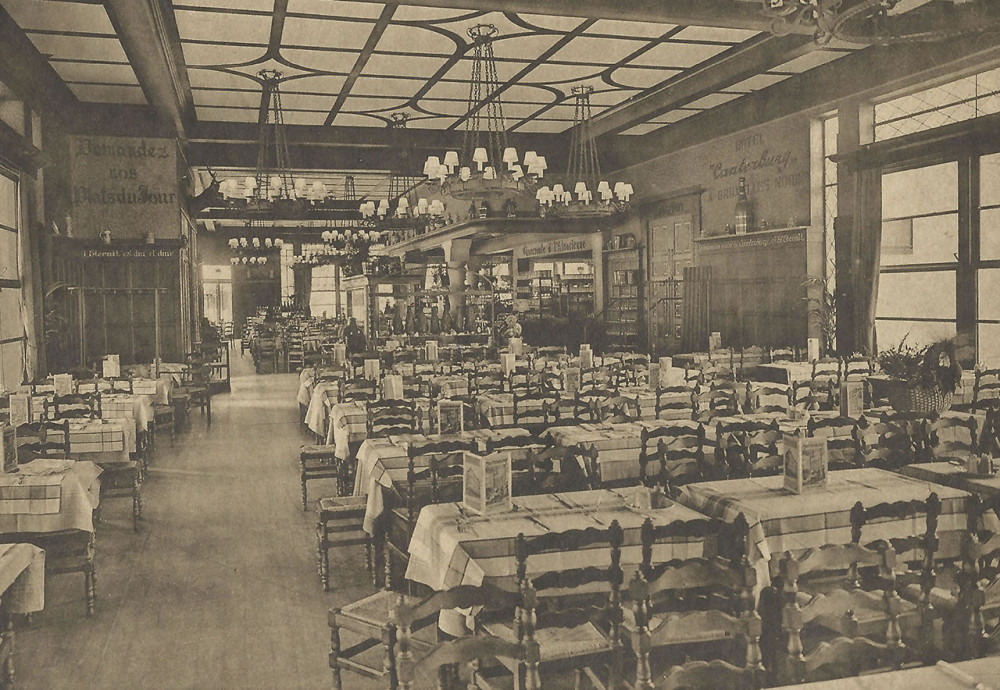 Then in 1948 Albert and Georges open the restaurant of the Claridge hotel in Buenos Aires, Argentina.

The Start of a Food Empire

Georges Niels wins the silver medal as part of the four-man bobsleigh team during the Olympic Winter Games in St. Moritz (Switzerland). In 1949 the 2 brothers Albert and Georges found Nielsvins (wine trade) and open the restaurant La Couronne on the Grand Place in Brussels. In 1953 the famous Belgian surrealist artist and painter Paul Delvaux,  is assigned to draw ‘La Couronne’  a colored litho,  to illustrate the menu. 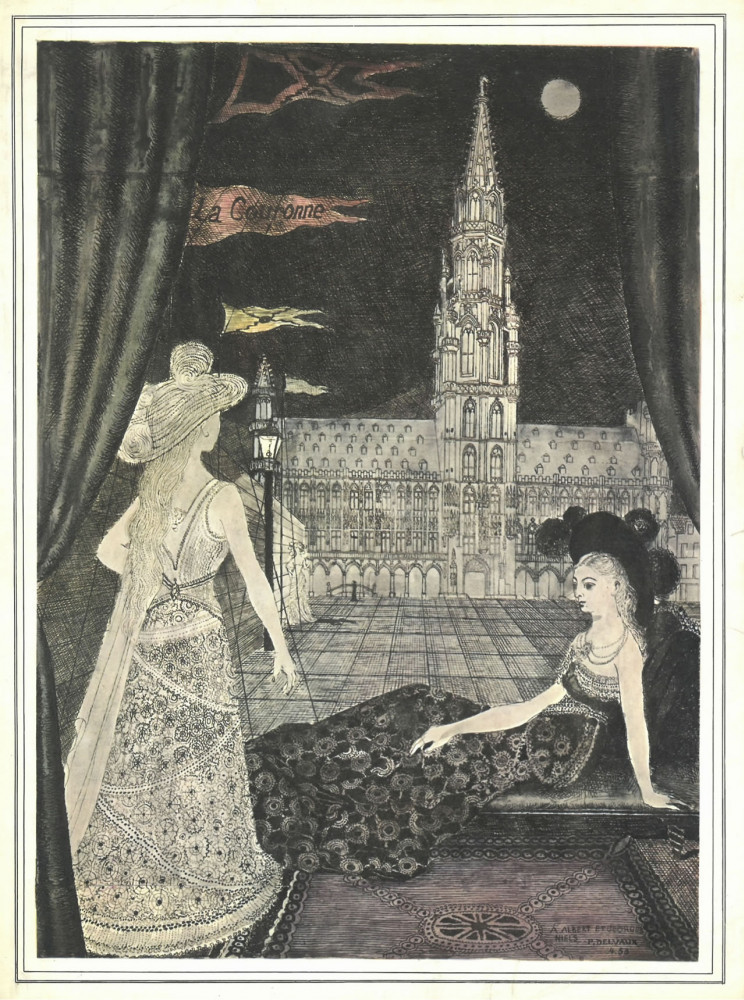 As a result of the success of the Claridge hotel restaurant in Buenos Aires, the Argentine government asks them to represent the country’s gastronomy at the universal exposition of 1958 in Brussels (Restaurant of the Argentine Pavilion).

Family working together is not alwaays easy. In 1959 Albert and Georges decide to go separate ways. Albert continues the Canterbury and the wine trade Nielsvins and Georges takes over the hotel Brussels and the restaurant La Couronne. A year later, Philippe Niels starts working with his father Albert. In his grandfather’s footsteps, Philippe goes to London for an internship in the Hyde Park Hotel.

Once back on Europen soil, in 1967 Philippe takes over the hotel Castel Sandra in Santa Maria Di Castellabate, which previously belonged to his uncle Georges.

The same year Georges represents the Begian gastronomy at the universal exposition in Montreal (Restaurant of the Belgian Pavilion).

This is only the beginning.

In 1968 Philippe and his father open the Vieux Saint Martin on the Place du Grand Sablon. Less than a year later Albert and Philippe open a fish restaurant La Marie Joseph in the Quartier des Quais.

With their culinary starts rising, Albert and Philippe are asked to represent Belgium at the universal exposition in Osaka in Japan. The pavilion has been designed by architect André Jacqmain and designer Christophe Gevers.  It featured a gastronomic restaurant, a tavern and two fries shops on the terrace.

For the first time, the Japanese are allowed to discover the fries cone and local products directly imported from Belgium.

The Niels family was among the first to introduce fruits from Israel and green pepper from Madagascar in Belgium.

The stepped double gable house which forms the corner of Petit Sablon and rue aux Laines was undoubtedly built in the 16th century. In 1895, the street leading to the new courthouse (inaugurated in 1883) was narrow and had few buildings. The Duke of Arenberg was then called the … King of Spain.

Albert Niels dies in 1978. Luckily it does not mean the end of a success story. 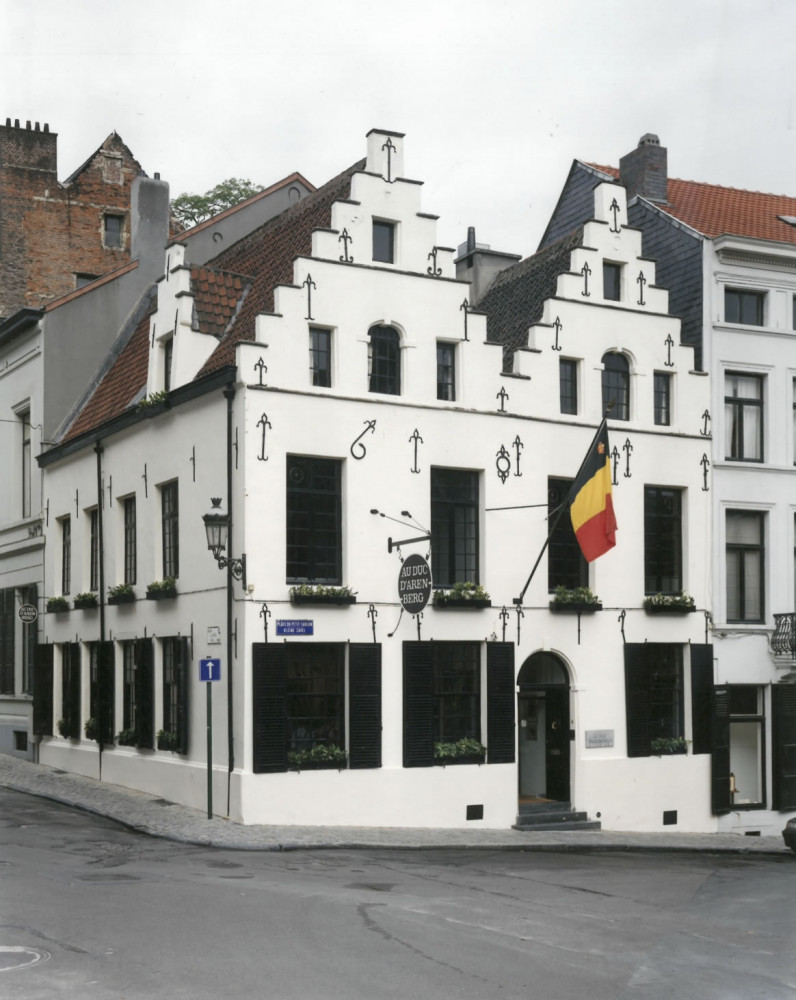 In 1999 the Niels clan announces to extinguish the kitchen fire at Au Duc and refuses to give any further reason.

Philippe and Albert-Jean Niels go on to open a new tavern-restaurant Canterbury at the Etangs d’Ixelles. Sarah Niels, graduates at the hotel school of Lausanne (Switzerland) in 2010  and joins her father in the family business.

Philippe and Albert-Jean decide to split. Philippe continues with the tavern-restaurant Canterbury, the restaurant La Marie Joseph and the wine store Nielsvins.

Louis Niels graduates at the Institute Paul Bocuse in Lyon in France and later joins the team.

The family tradition lives on.

Soon after I moved to Brussels in 1994 I met Abdel, a Belgian Morocan engineer in charge of replacing and restoring the wooden windows of the 1883-townhouse I had just bought. When he first moved to Belgium he started working at the Au Duc d’Arenberg as a waiter. I can picture that because Abdel was tall and pretty handsome.

He remembered the girl living in the upper apartment of the Au Duc restaurant building. Daddy was a rich man so money no issue. She’d never cook and order food for herself from the restaurant downstairs.

She had a dog with an acquired eclectic taste. Steak Tartare with French Fries ( which are 100% Belgian btw ) was on the menu for the nice price of 1,900 Belgian Francs ( 47 €).  Of course she would get a volume discount giving the fact that doggy had steak tartare every day and skipped the fries. Steak tartare is a popular dish in many restaurants in Belgium. And for sure far from being that expensive even at adapted rates.

In 1990 the average interprofesional wage in Belgium was 32 Belgian Francs, or 60 times LESS than the price of a steak tartare at Au Duc d’Arenberg ( now closed ) !

The Niels’ restaurants are still pricier than the average bistrot. But then again, you get the service, the tradition, the well dressed waiters, the quality of the food and the art work.

These are, according to the culinary site ‘Con Mucha Gula’

the 8 best places in Madrid to eat steak tartare.

The article is written in Spanish.

Obligatory stop if you walk through San Telmo is the “Steak tartare avec frites” synonymous with “Petanque”, the French run restaurant that serves ( to my latest knowledge ) the only steak tartare in town.

Nowhere else is it prepared like here.  The service is very good, and the owners are always friendly, approaching the tables and having a personal treatment with all their guests. Service, quality, and price go hand in hand in this place.

My next culinary trip takes me to Malta, where the caper grows on native grounds, with its famous caper based national dishes, its rich history and amazing cuisine !

Patagonian capers, the southernmost in the world

The southernmost capers are a fact ! Grown on the peninsula of Puerto Madryn, in the Patagonian province of Chubut, Argentina, these capers are undoubtedly