“Maltese cuisine is very much born from the history of an island state that was a crossroad between Africa and Europe, with dishes that are influenced by British, French, Italian, North African and pan European.

Maltese national dishes tend to be humble and make the most of what the land and sea has to offer, more often than not it is a one pot meal to make sure meat or poultry is stretched to feed large families. ”

The quote on the right comes from Stefan Hogan, Executive Head Chef at Corinthia Palace, Malta since 1993. Hence Stefan needs no introduction. Stefan, like no one else knows his native Maltese cuisine. Trained at the Maltese catering school known as The Institute for Tourism Studies, he loves to introduce produce of small cottage industries, local fish being an absolute must of course.

The humble character of Maltese cuisine can be found in the use of products which are readily on hand on the islands. No other dish is as local as Stefan’s childhood favorite, a seasonal dish of steamed artichokes with olives, new potatoes, tuna, capers, garlic and tomatoes with a great olive oil. All of its ingredients grow abundantly on the islands, the Gozo caper being the star of them all.

“This dish takes me back to fond childhood memories of my mother’s cooking.”

Whilst I am still waiting for an answer from Stefan and hoping to get a hand on his very own recipe, I found several versions of stuffed artichokes in which the caper plays a leading role. Maybe I’ll need to wait till next Spring when artichokes are back in season to try Stefan’s recipe.

In Malta artichokes come in season in March. In ‘Hello, wild artichoke,’ Science Wanders recounts the history and evolution of the artichoke as we know today.

Stuffed artichokes are a classic Maltese recipe. They are usually stuffed with a variety of Maltese food staples: breadcrumbs, parsley, olives, capers, garlic and olive oil. Anchovies or tuna are also often added into the mix, but for a vegetarian variant I suggest adding some sun dried tomatoes, which provide a kick of sour and salty flavor.

1. Chop the olives, capers, parsley and sundried tomatoes and toss them together with the bread crumbs, garlic, olive oil and salt and pepper to taste.
2. Prepare the artichokes by trimming the stem and removing the outer leaves at the base of the artichoke. Then trip the top off the artichoke and cut off the prickly points of the leaves.
3. Pry the artichoke leaves open and stuff between the leaves with the mixture.
4. Place the artichokes upright all together in a large pot of water, on a simmering fire. Cover and steam for about 45 minutes, until you can easily pull out a leaf of the artichoke.

Luck or faith has it that whilst searching for images of artichokes on Gozo in bloom, I found an article by a Belgian! woman living on Gozo. She writes on her blog gaiainaction :

“Today I found a very old recipe book in the library in Ghajnsielem. It dates back to 1958 and it was compiled by Carmen Carbonaro, it is called ‘Maltese Dishes’ and seeing that I cannot find copyright information I am going to use some of the information to share it here. It is a wonderful little book! Apart of the interesting recipes it has also got illustrated advertisings from the time period it was written in, fabulous bit of information for foodies and those interested in traditional facts of twentieth century Malta or Gozo.”

On page 27 of the little book, it gives the recipe for ‘Stuffed Boiled Artichokes’ or ‘Qaqocc mimli’ in Maltese. Among the ingredients are Olives, Parsley, more Olives, Breadcrumbs, Anchovies and Chives. And of course globe Artichokes. Since Stefan mentions the recipe calls for capers, I am waiting for a full copy of the recipe to see my suspicion confirmed.

The recipe includes a funny fact: the artichokes have to be ‘beaten’, which should not come as a surprise as in the olden days they also used to ‘beat’ the calamari to tenderize them before cooking!

“What I am rather surprised of though, says the author of the article, is that at the end of the recipe it says to serve the artichokes when cool, with mayonnaise, and in those days that would have been home-made mayonnaise, the way we used to make it in Belgium last century. I guess that here it would be prepared using olive oil rather than corn oil like we did.”

“in the time of her grandmother ( a young lady in the organic vegetable store ) people did not use butter in Gozo, only lard and this, she said was reflected in the recipes.”

The little book was published by Empire Press in Malta. In the middle of writing this article I allowed myself some distraction and managed to buy a 1971 copy of the book on Ebay!

What grows in Malta grows in Sicily, the largest island in the Mediterranean. So it should not come as a surprise their cuisines have a lot in common.

I have always loved artichokes, having tried them for the first time during a holiday in France with my parents at age 17. I’ll always remember Normandy for having gained quite a few pounds in less then 3 weeks.

Then when I started exploring my way into the kitchen myself, I rarely cook with artichokes. I guess it was for lack of experience. These were the pre-google times. Now, with a handful of clicks I loose myself in recipe world.

Here is the Sicilian stuffed artichoke recipe I cooked last ( WITH capers ) and had a blast ! 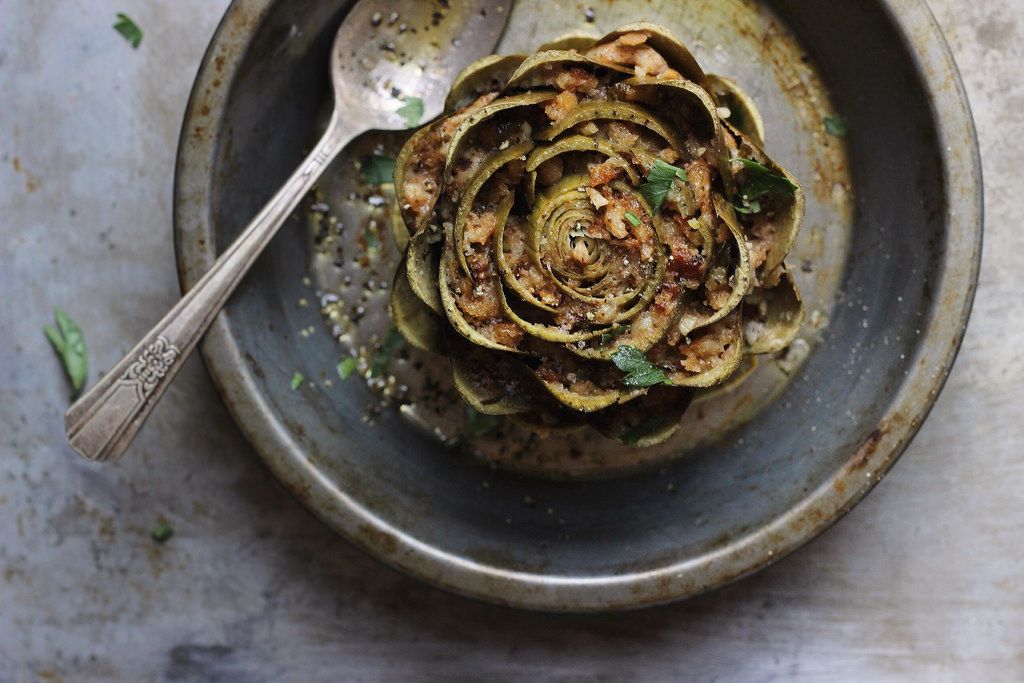 For a perfect Malta experience, I suggest you check out the following online magazines. Once on the island grab a paper copy ( if available ) in one of the the theatres, musea, restaurants, bars …

ENCORE ( encore.com.mt ), a three-monthly magazine on the arts & culture in Malta

Friends of the Earth Malta ( foemalta.org ), on sustainable food & farming in Malta

Gaiainaction.blog, the same wonderful woman who writes about the artichoke recipe and the 1958 cookbook, keeps this amazing blog on Gozo. I strongly recommend you do not skip the read, as it is a rich source on the fauna, flora, architecture … of Gozo

This article is part of a series of stories about Malta. I was lucky enough to visit Malta during the month of November ’20 when the rest of Europe had just re-entered lockdown to resist the second wave of corona. I understand how local businesses were struggling with tourism as good as non-existing. But I felt blessed being able to visit this wonderful island without the mass tourism Malta normally gets.

Even in Autumn nature is magnificent, especially in Gozo. But I’ll be back to admire the blossoming of capers, artichokes, wild thyme…. I am decided I won’t leave the island without trying Stefan’s favorite childhood recipe.

My next culinary trip takes me to Malta, where the caper grows on native grounds, with its famous caper based national dishes, its rich history and amazing cuisine !

Patagonian capers, the southernmost in the world

The southernmost capers are a fact ! Grown on the peninsula of Puerto Madryn, in the Patagonian province of Chubut, Argentina, these capers are undoubtedly